Being a 2015/2016 Chevening scholar was a deep learning experience. I am not referring only to the fact of having increased my own personal standards thanks to the demanding academic programme I chose at the University of Birmingham. Beyond the obvious expansion of knowledge that other scholars and I had during our studies, I consider that my learning process includes my fascination with different cultural expressions. As an illustration, I had a home shared with two ladies: one of them from Zimbabwe and the other from the US. The simple fact of living in the same house made me learn about other lifestyles. This learning was even wider at school, where I met people from many other parts around the world.

Perhaps the multicultural atmosphere of Birmingham –and the UK in general– let me open myself to a true experience of diversity. My time in the UK was then a journey characterised by intercultural communication. I appreciate very much my ability to speak English since this language has become a bridge between peoples.

Thanks to the opportunity I received through the Chevening Award, I could learn more about the fascinating British culture. I enjoyed walking in emblematic places for the world history, such as Canterbury, Bath, Belfast, Stonehenge, Liverpool, London, Coventry, Manchester, Cambridge, Stratford-Upon-Avon. Being in the land of famous writers, musicians and scientists meant a privilege to me. 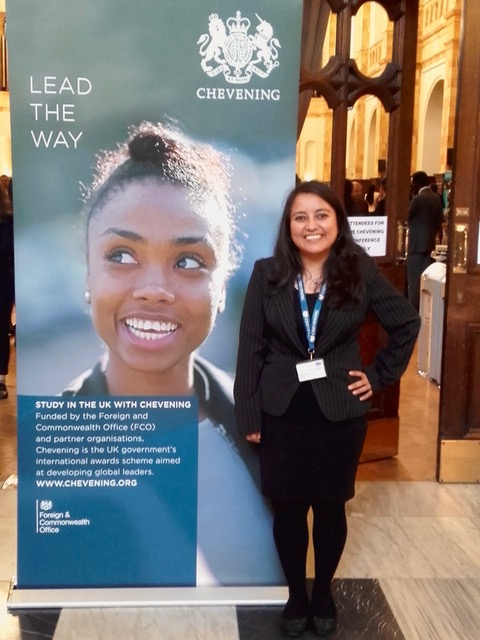 Besides the ties and nostalgia for the UK, I came back to Mexico with the certainty that I am a better person after my year of studies in the UK. And this certainty makes me feel inspiration for my future actions in my home country: although I am proud of being Mexican, I am aware of the gaps that my country has especially in my area: education. I hope I can make important contributions in this field.

As a graduate of the Bachelor degree in Preschool Education from the Benemerita Escuela Normal Veracruzana in Xalapa, Veracruz I worked mainly in rural and deprived areas, where I was able to see the reality that hundreds of children and their families face every day to access their right to an education. Since I started working in this field I realise that one of the main factors to improve education standards is the teacher training and professional development of the teachers in service. Thanks to the opportunity that the Chevening Scholarship from the UK government fund by the FCO and in partnership with The Anglo Mexican Foundation I was able to pursuit my Master's degree in Early Childhood Studies in the University of Huddersfield.

The academic experience was vast and enriching because of the commitment that lecturers, professors and staff in general of the University has with the students and the great number of other international students made my social environment to feel safe and welcome since the very beginning as well as British people in every town and city I visited who were always willing to help.

Now that I have finished my degree I will like to continue to improve my intellectual and practical knowledge of the education process in different countries but more important to be able to participate actively in the creation and evaluation of teacher training and professional development programmes in Mexico so to be in a future an opinion leader for public preschool education.